Just got back from shooting my first box of my own 9mm reloads and I thought I would share some results.

These were all 115gr plated RN HSM bullets. I bought them just for making target ammo. They are sold in boxes of 250 and are pretty cheap so I inspected them and measured some random samples and they were very consistent. +1 to HSM for a quality target round.

The Hodgdon site suggests 4.0 gr. min and 4.5 gr. max for this bullet and the “Universal” powder. I wasn’t ready to manufacture 100+ without some quick testing and I’m glad I waited.

I didn’t measure but I was roughly 25 feet from my targets, I’m pretty comfortable from this range especially when trying out new stuff (more on that in a minute).

I had problems right off the bat with the light loads. The 4 grain loads had feed problems in my XDM. Every 3rd or 4th round was stovepiping which was very unusual, this pistol has been a rock-solid performer with factory ammo. Not good. Here’s my target:

I was extremely comfortable with my mechanics. Those low-fliers? Not me. And yes, I did mislabel all my targets with 40,42 and 45 instead of 4.0, 4.2 and 4.5. Pretty consistent load, but the feed problems kill it and I think they were also responsible for the low shots.

Next up was the 4.2 gr. I had 2 more stovepipes with these so they were just a little light on the powder. Check the target.

A few rounds are a little high and again, I think 2 of those can probably be credited to the stovepiping and the lack of a solid chambering afterwards. Pretty damn consistent! This was my best target of the day.

I made the mistake of putting down the 9mm, changing out targets and then deciding to have a little fun with the new .44. I did! It was! Shooting a silky smooth piece of history like that Super Blackhawk was awesome. Unfortunately, I think it made me nervous for the rest of the time I was shooting. I was running HSM “Bear Loads” through it and they were vicious. 305 grain bullets and man did they pack a punch. The new Hogue grips took care of the pinching problem, but unfortunately didn’t save my palm from a big ol’ gnarly blister. I also failed to bring a screwdriver with me that would fit the sites, stupid mistake. It is consistently high and a little left.

Anyway, the 4.5 gr. rounds. All of the feed problems were fixed with a few more grains of powder. No problems whatsoever. I could feel a little sharper recoil with these that I didn’t notice going from the 4.0 to 4.2. However, here’s the target. 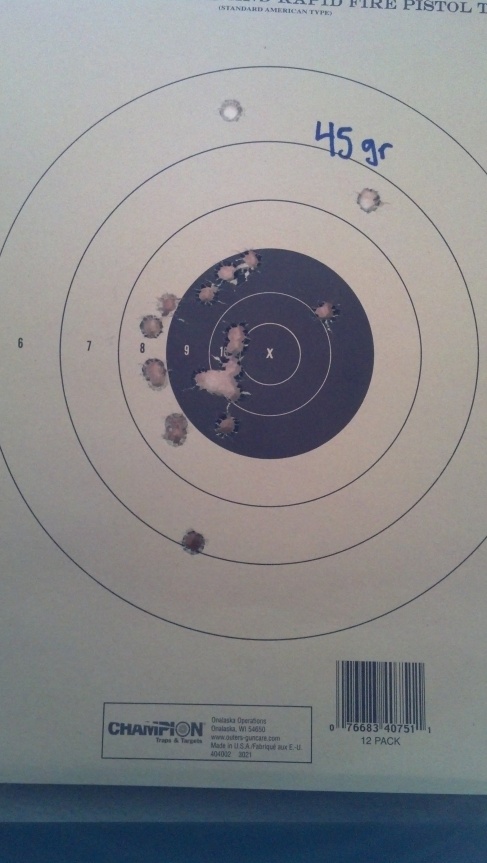 Now, I know a couple of those fliers were just plain old me. I was a little shaky and “gun shy” after blowing some very large holes in a beetle killed Ponderosa pine. The whole tree was shuddering every time one of those massive .44 mags hit it. Bullwrinkle can attest to how much fun those Ruger’s are, but they are stressful to shoot more than 18-24 rounds through. ( I put a full box of 50 through mine +12 .44 specials)

For the most part, those 4.5 loads were very consistent, but a couple of those rounds are sort of “inbetweeners”. I’m confident that I could dial back just a little on the powder (say 4.4 grains) and get the best of both worlds with good consistency and good feed.

Looking forward to hearing about the pig hunt.